I am the proud recipient of.... 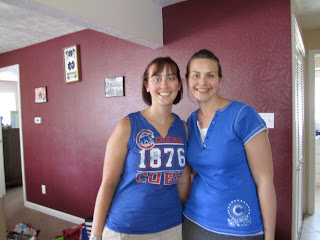 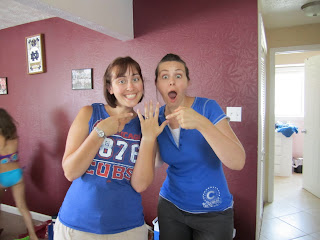 My sister and I at her 30th birthday party...yes, we had to wear attire that contained the Cubs somehow.


He proposed and she said yes!!!

Even though this isn't the biggest part, she asked me to be her maid of honor.  I am beyond blessed and honored that she'd ask me to stand up there with them!

Congratulations to Karen and Justin!
Posted by Queen Bee at 9:06 PM No comments:

The people that lived here before me created a disservice in the bathroom.  What I don't like, they did.  I replaced hardware and painted as I could, but to put one single row of tile (baby blue) along with cream tiles throughout the shower...come on!?!  And then, because they truly knew what they were doing, they painted the hardware into the wall because painted screws and poles look better.  What were they thinking???
I do not have the money to redo the bathroom the way I want to, but I can make changes here and there.  So begins the adventure.
First a shower curtain.  Make that a curtain.  The problem is, there's no holes.  And I can't get the shower rod out of the painted hardware.  A double shower rod costs more than $50...out of the question (plus it wouldn't fit the smaller width of my shower).  My mom came to the rescue! 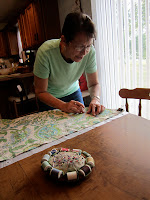 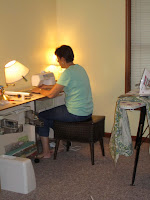 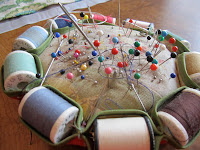 Her sewing machine makes button holes...yay!!!
And tonight, I can reveal my new bathroom!!!


Thoughts???  No, you cannot hire my mother, but I'm sure she'd appreciate the thought!

Posted by Unknown at 9:00 PM No comments:

I am trying to upload some photos into a post...AND IT WON'T WORK!  I keep getting the Picasa Album suggestion and not the access into my computer.  I have photos that I want to share, wifi to do it, and time to type.

Tomorrow is a new day and I'll try again.
Posted by Unknown at 7:18 PM No comments:

I am not a flier.  As a family, we traveled by car.  Never by plane.  My sophomore and junior years were my first adventures of flying.  Fast forward...control issues, 9/11, and lack of flying led to a very irrational fear of dying while flying.
I sometimes use the motto of "Go Big or Go Home."  Not wanting to freak out, I saw my doctor and got a prescribed tranquilizer to chill out.  I had six pills...three for going and three for coming back.
Medicine taken, we sat in the plane ready to leave O'Hare.  An older gentleman was not feeling well, locked himself in the bathroom, and after many minutes, he was taken off the plane.  That meant bringing the gateway back.  Some of his family members got off.  That meant bringing the gateway back again.
The pilot came on later and told us we needed to land in West Palm Beach to refuel and to avoid some weather in Miami.  I wasn't ready for this, so I popped another pill as we were getting ready to take off.  What a waste!  After finally getting the "thing" that pushes the plane away working, we were no more up than we were coming down in Miami.  And as we landed, our connecting flight to Honduras was taking off with two of our group members on it.
Now came trying to get 20 people to Honduras on the same flight.  I don't remember much of the time, other than buying a blanket in a gift shop (it was freezing!!!), and sleeping throughout the airport.  I slept on a chair, on the floor, I didn't care where.  We were given vouchers for a hotel and three meal vouchers.  One member got to leave Saturday night.  Five Sunday morning and fourteen of us left Sunday night.
As our flight was on the way to Honduras, the pilot came on to let us and the flight attendants know we would be entering some bumpy weather and to strap in.  Um, dark clouds, lightning, and turbulence...just what I wanted!  When we landed, it was not just me, but I heard several others clap.  You know when people clap when you land, it was a bumpy and stressful flight.
***
Coming back from Honduras, we had had a prayer session the night before and I truly felt like God was asking me to trust Him and His power.  His peace is bigger than my tranquilizer.  I only told one of our translators what I was going to do and as people questioned if I had taken my medicine, I didn't lie, but allowed them to know that I was good.
Taking off from Honduras was tough.  We drove down the runway, made the corner, revved the engines, and STOPPED!  We repeated it.  And again.  By this time, I'm freaking out a little and having an intense conversation with God.  I had seen the pilots looking through manuals and flight plans and was hoping they weren't beginners.  The flight attendant came on and explained that they were adjusting the speeds for the new weight of the plane.  Uh, hello...speed of plane needs to be fast.  Duh!  We took off and it began.
God is so good!  Each flight I was able to switch with a gentleman from our trip that allowed me to sit near his wife.  She was amazing!  She would talk with me, reassure me that it was okay, and rub my back as needed.  I even dozed off a little on the plane (which didn't happen when I had taken the medicine).
I finally let the cat out of the bag and told people in Miami that I hadn't taken the medicine...they were all so proud and excited.
When we were getting ready to land in O'Hare, I guess we had been circling the airport when our plane took a sudden dive.  I was convinced at this point that our plane was going down.  The flight attendant had been walking by afterwards and checked in on me (he knew about my unease) and I told him that I didn't like the sudden dive.  He told me that the pilot has to follow what the traffic controller says.  Nonetheless, I still didn't like it.

I'm back from Honduras and as I said on my status update for Facebook, I feel like I left more of me there and came back with more of who I am.  Not sure if it's possible, but over the next several days, I hope to debrief and process with you as I share my pictures, thoughts, and learnings.

Thanks for all of the prayers!
Posted by Unknown at 8:32 AM 1 comment:

Tonight, I gathered with some dear friends and laid out my fears, worries, and anxieties, and was met with love, compassion, and grace as they prayed with and for me.  Love, love, love that I have friends that I can just be with.

I am embarking on my second trip to Honduras Saturday morning.  I am excited to go again and will be excited to share as much of the journey as I can with you.

And this part may seem strange, but if you would be gracious enough to pray for me, I would love to return the favor.  One thing that I love to do when I am feeling attacked is to pray for others and take the focus off of myself.  If you leave me a comment (and you don't have to leave your name or be specific) and let me know how I can pray for you, I would be honored to pray while I am on my trip (and afterwards).