Knowing Valentine's Day was coming and not wanting to be cheesy, I told my amazing boyfriend what I wanted: tulip bulbs, a beautiful note, and no proposal. I want my own day when he chooses to ask me to marry him.
I received a crossword puzzle that he had created.  One of our first dates in my hometown was spent doing a crossword together and since then he bought me a book of crosswords, I'm getting better at them, and I bought him a calendar of the New York Times crosswords.  It's kind of our thing. And I love that he made one for me.
Certain clues led to more clues which gave me more answers to find my beautiful box of tulip bulbs.
The last set of clues led to a beautiful note which ended with him telling me for the first time that he loved me. I was crying so I made him say it again so I could fully hear it.
The tenderness in his voice was enough to melt my heart.
We ended our great night with a movie and I ended up only watching about half. I was so tired, I just wanted to go to bed. As I was getting ready, a text came thru. Who in the world would be texting me at midnight?
Well, it was Nate. With one more puzzle for me to solve. It had four numbers followed by a's. I figured they went with the crossword and sure enough they did.
Will
You
And at that point, I was wondering if something was up. I just kept saying no, no, no, and shut up.
As I read the third word (marry), I turned and looked at him. He held out a box and opened it. Inside was the most beautiful ring I have seen and my hands shook as I put it on. I remember saying yes, crying, and hugging him.
I cannot believe that I am engaged.
Thru this relationship, God has reminded me that His timing is right. Always.
And Nate's timing was right...not Valentine's Day...midnight on the fifteenth.
I love my man!!! 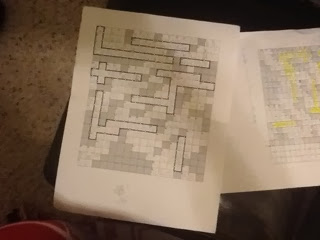 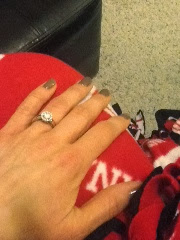 I planned on working out.
I planned my food.
I planned my lessons.
I planned my evening.
And it came undone. In a way.
Lessons were taught. Kids shared reading goals with me. It was AMAZING!
I ran errands. Took me ninety minutes. Much longer than anticipated. And then came the call
My mom had some chest tightness at work. As a precaution she went to the hospital. And that's where my evening went.
No workout. No house chores done. No relaxing evening at home.
But good times were spent hanging with my mom while we wait for bloodwork tomorrow morning.
I would appreciate prayers. Will let you know more as I do.
And no, this is not going on Facebook. She's quite private and she would be shocked if she even knew I wrote about it here. Thankful for the support.
Posted by Queen Bee at 8:31 PM No comments:

Granted, shark week.
Granted, I haven't tracked as well lately.
Granted, I have eaten my activity points and my weekly.
I shouldn't be shocked my number is up two pounds from last Tuesday.
I walked out defeated. For a moment.
I put myself in my shoes and talked to myself as if I was a member. Because I am.
I reminded myself to do the program. Well. Each day. Each meal. Each moment.
And I also discovered the peanut butter bliss brownie by Weight Watchers. And oh yeah...uh-mazing and worth the two points plus. I'm definitely going to save two each night for one. Yum, yum!
And I am excited to share with you next Monday how I do.
Future apology is being said right now. Sorry for focusing on this, but thank you for letting me use my blog as a soundboard. As I become and stay healthy.
Posted by Queen Bee at 9:08 PM 1 comment: